Saturday June 13th is National Cupcake Day. In conjunction with JoJo’s Cakes and Bakes, we are offering, to Island residents only, a box of 6 cupcakes for £10. There is a choice of vanilla or chocolate cakes, and all will have buttercream icing. All profits will go towards buying a much needed tandem trike. The cakes must be ordered by Thursday evening and they will be delivered to you on Saturday morning. All orders to volunteer@isleaccess.co.uk. Thank you

Here is Katie’s story about the benefit of the bike to her son, Matthew

My son Matthew is Autistic and non-verbal with learning disabilities, he was 17 when we took him along to the first trial bike session. He had never ridden a bike before in his life. It was one of the rights of passage I always thought as parents we would see, and as keen cyclists ourselves we were looking forward to family bike rides together. However, Matthew never had the ability to ride a traditional bike, lacking the cognitive ability to keep balance, pedal and steer safety.
We selected the Vanraam tandem model that was available at the session as it would allow two riders, giving one rider the steering control. The tandem had been borrowed from the mainland. As it is a trike, it remains stable which was key as Matthew is now much the same size as us and we needed to ensure balance. On this bike you can choose to have one rider pedalling or both, so if one rider lacks the ability to pedal, they can still enjoy the ride. To our amazement Matthew got the idea of pedalling very quickly and we were doing laps around the court in no time! For the first time our son was riding a bike! It was elating!
I offered to help Jan and the team at Isle Access with the project as I was so inspired and wanted to help other individuals have the opportunity to ride a bike who may never had the opportunity before.
At the second session we attended Matthew made a beeline for the same bike, itching to get moving! The bike is extremely popular with attendees and there is often a wait to use it. Another young man called Callum who has learning disabilities had been riding the bike for some time on his own so we asked him if he would mind Matthew joining him. So, we stood back and literally watched independence in action; two young men with additional needs riding a trike together, requiring teamwork, co-ordination and pedal power. Callum had the ability to steer, so together, by having the accessible equipment, they could be independent in their activity. Matthew is unable to speak, but he can follow basic verbal instructions which Callum gave (mainly “keep pedalling Matthew!!”).
As parents of special needs children, even into adulthood, you need to step in and support them with most, if not all, activities. To be able to stand back and watch the two of them in action was an immensely powerful and emotional experience. It was more than just riding a bike; it was teamwork, independence and fun!
For me as Matthew’s mum, this project really has enabled, offered independence and given access. When people are given the right equipment and opportunities so much is possible. 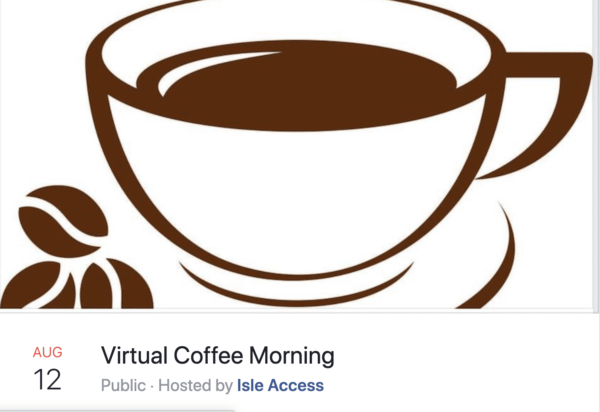 Come and join us for our next coffee morning Via Zoom Just email info@isleaccess.co.uk for Password 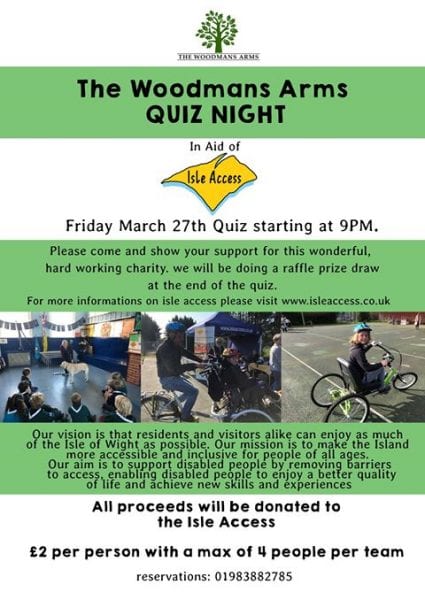 Our quiz night at The Woodman’s Arms has, unfortunately, been postponed because of the current health situation. We hope to have another date for you shortly

We are delighted to announce that we have been awarded a grant from the Postcode Community Trust, a grant-giving charity funded entirely by players of People’s